Antibiotic research pushed forward by use of large infrastructures 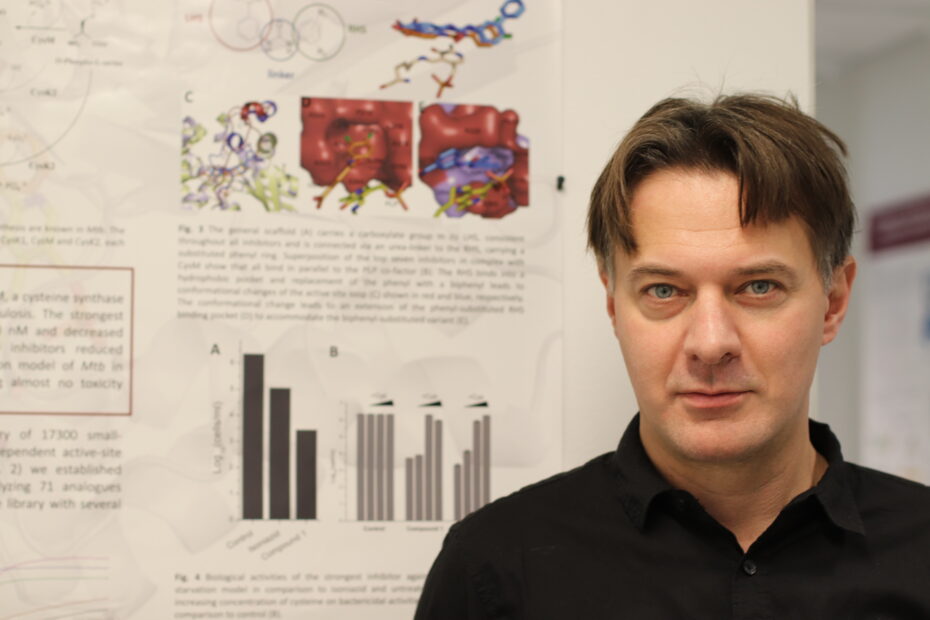 Robert Schnell is a scientist at Karolinska Institute focusing on development of novel antibiotic candidates. He has used both SciLifeLab and MAX IV laboratory infrastructures in a multifaceted project addressing the problem of infectious diseases in the context of the silent pandemic of antimicrobial resistance (AMR).

Infectious diseases spread fast due to population mobility and the global economy. The COVID-19 pandemic is a vivid example of this, but other infectious diseases have since long been and are continuously a part of the threats we are to handle. At the same time, we are facing increased antimicrobial resistance (AMR) towards several drugs. The drug resistance threatens the effective treatment of a range of infections caused by bacteria, parasites, viruses or fungi. In addition, it increases the risk factor for routine medical procedures like surgeries or renders more complicated interventions using immunosuppression (such as transplantation) impossible.

Tuberculosis (TB) has haunted mankind since the dawn of civilization and is one of the leading causes of mortality worldwide even today. Mycobacterium tuberculosis, the causative agent of tuberculosis most often affects the lungs by entering the lower airways, infecting primarily macrophages, the immune cells orchestrating the defence against bacterial pathogens.

According to the World Health Organisation (WHO), one-quarter of the world’s population is infected by M. tuberculosis and 10 million people fall ill with symptomatic tuberculosis every year. Although tuberculosis is a preventable and curable disease about 1.5 million people die from TB each year and it is the leading cause of death of AIDS/HIV-patients. For example, TB is one of the world’s top infectious killers and in addition a major contributor to antimicrobial resistance.

Interestingly, apart from causing acute disease, the M. tuberculosis bacteria developed a unique way of establishing a long-term survival inside macrophages in a so called dormant or resting stage. Today’s treatment is usually a cocktail of different antibiotics, but the current treatment methods are not effective against dormant bacteria which remain in the hosts. These resting, inactive bacteria wait for the immune system to be weakened for some reason, due to e.g. disease or medical intervention, and then reactivate causing symptomatic disease.

The long-term survival of M. tuberculosis in the host leads to a persistent infection. The metabolically inactive/dormant bacteria are less susceptible to standard antibiotic treatment and the emergence of antibiotic resistance is closely related to this dormancy. Novel validated targets and effective antibiotic candidates with established mechanism of action are needed to improve TB-treatment and face the emerging antibiotic resistance, which is one of the major challenges of the 21st century.

During recent years, Robert Schnell and colleagues have studied the potential novel ways to target the dormant mycobacteria. Macrophages, the immune cell of the host, produce small reactive molecules and pour them on the engulfed mycobacteria to kill them by causing oxidative damage on macromolecules (proteins, DNA, RNA and membrane lipids). The tuberculosis bacteria, as a response, defend itself from the oxidative stress with a robust redox-defence system. It is a long and slow battle that takes place in the infected patient.

In mycobacteria, the intracellular redox defence is dependent on the thiol compound mycothiol (the analogue of glutathione), and its biosynthesis is dependent on the availability of an amino acid L-cysteine. Therefore, cysteine biosynthesis is a potential target for new anti-mycobacterial compounds interfering with the survival of non-replicating mycobacteria and the long-term persistent infection. Several independent studies indicate that the cysteine production pathway relies on a specific cysteine synthase enzyme, CysM, and that is the dominant route to cysteine in dormant bacteria.

“The inhibition of this cysteine biosynthesis pathway potentially kills the dormant bacteria, it kills them in their sleep. It is also important that these pathways are not present in humans, and therefore this approach is less likely to interfere with our normal metabolism” says Robert Schnell.

Based on earlier discoveries from many years of research, Robert Schnell and colleagues have now been able to develop and characterize small molecule inhibitors that bind to the M. tuberculosis CysM protein with high affinity. In turn, the enzyme´s active site is blocked and thus inactive. Consequently, the supply of the vital component for the redox defence system is blocked, thereby the bacteria are weakened and exposed to the killing mechanisms of our immune cells.

The first inhibitors of the CysM enzyme were discovered in a high throughput screen based on an assay worked out by Robert Schnell and colleagues and carried out at the SciLifeLab Chemical Biology Consortium Sweden (CBCS) in Solna. The CBCS national infrastructure node in Stockholm provides lots of help from the staff researchers. From writing the application to optimizing the screen, and also in data analysis after the high-throughput screen (HTS).

The project required considerable efforts in organic chemical synthesis. The partners in organic chemistry and medicinal chemistry were from the BITS-Pilani institute at Hyerabad, India who received a bilateral research grant funded by Vinnova in Sweden and the Government of India. Along the years, more than 200 compounds were analysed, several of them produced specifically for this project and strong specific inhibitors of the selected target protein were obtained.

The interactions between the inhibitors and the protein was determined through high-resolution crystal structures of the protein-inhibitor complexes by the method of X-ray crystallography using the synchrotron radiation at the MAX IV Laboratory (beamline BioMAX) and other synchrotron facilities. The detailed structural information assists in the design and optimization process on the way to development of effective, improved inhibitors. Access to synchrotron facilities like the MAX IV laboratory in Sweden is important for many directions of biomedical and pharmaceutical research. The facility provides high standard instrumentation for X-ray crystallographic measurements for well-motivated projects and less experienced users get help from the staff experts.

“This implies that we have the compounds in hand that kill the non-replicating bacteria where the current antibiotics are less effective” Robert Schnell explains.

Thus, this may allow a more effective treatment as these compounds can kill the non-replicating dormant bacteria as well, resulting in a more effective cure with less probability for reactivation later in life and less possibility for the development of antibiotic resistance. The newly developed compounds are now promoted as antibiotic candidates against tuberculosis.

“The way to get an approved drug is very long and we hope that the candidates are picked up by an industrial partner and moved towards clinical development” says Roberts Schnell.

Robert has used different research infrastructures, both nationally and internationally to answer his scientific questions.

The screen for molecules that could bind and inhibit the CysM protein, was done in collaboration with the SciLifeLab Chemical Biology Consortium Sweden (CBCS) platform in Stockholm. SciLifeLab is a national research infrastructure and resource of unique technologies and expertise available to life scientists.

The CBCS provide a state-of-the-art platform and expertise for the generation of high-quality bioactive chemical tools (small organic molecules) for applications within life science research in general and with the ultimate goal to explore complex biology. The units comprise compound handling labs (hosting the SciLifeLab Compound Collection of ca 200,000 molecules), screening labs (microtiter format liquid handling robotics and a wide range of plate readers), and chemistry labs (equipment and instrumentation for organic chemistry synthesis and analysis).

To find out how the molecules bind and inhibit the target, the inhibitor-bound CysM protein was crystallized, and these samples were analysed at the BioMAX beamline at the MAX IV Laboratory in Lund and at other synchrotron sites (ESRF in France, PETRA-III in Germany, Diamond in the UK). MAX IV Laboratory is a Swedish national laboratory providing scientists with the most brilliant X-rays for research.

BioMAX is an X-ray macromolecular crystallography beamline of MAX IV Laboratory designed to be stable, reliable and user friendly. The beamline experiment set-up is highly automated, in terms of both sample handling hardware and data analysis, including feedback on the data collection. BioMAX is frequently used for life science research.

The background for our compounds (not the current patented ones, similar, OK as ref here)